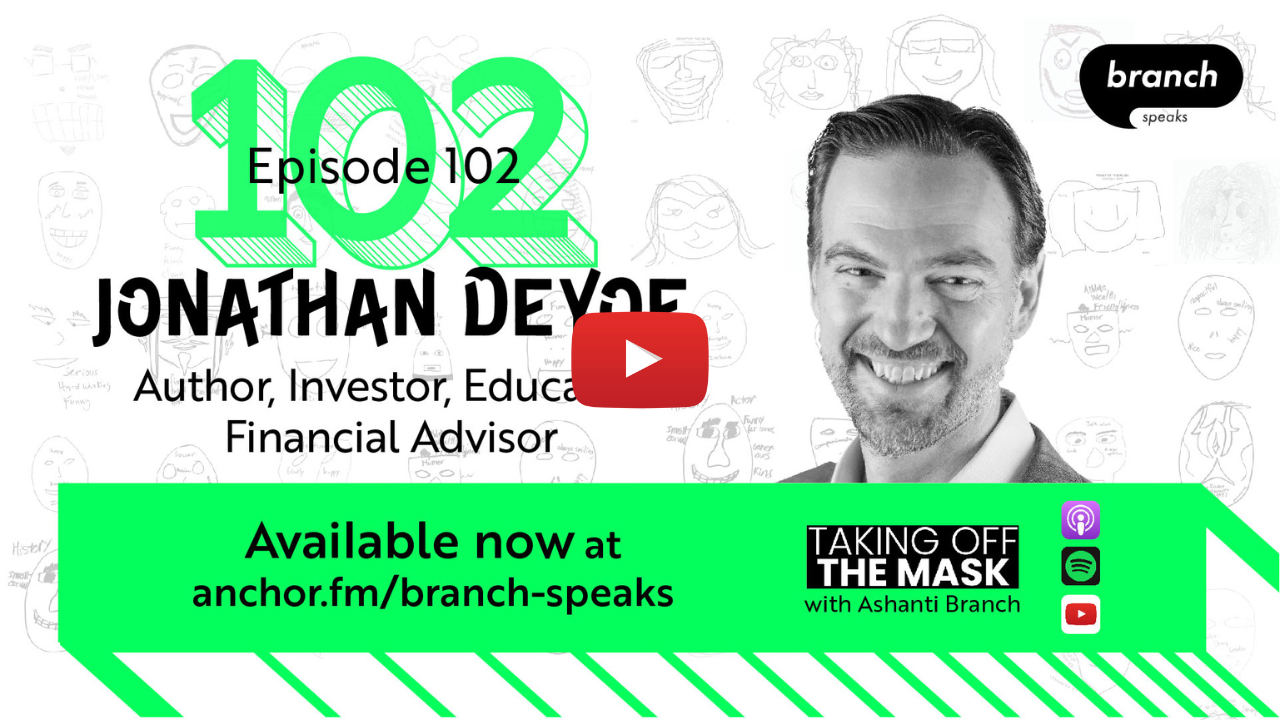 Happy to reconnect with an old acquaintance and go deeper personally. I was introduced to the Million Mask Movement when Ashanti came to our kids' middle school to give a presentation about the masks that boys wear on the playground.

It resonated and I was super excited to be invited to his podcast, Taking Off The Mask, to explore the masks we still wear as adults.

We talk about the fear, anxiety and grief that lie behind the mask of our intelligence and good habits.

Leading with heart & boosting the vulnerability even more: Ashanti Branch talks with Jonathan DeYoe about men dealing with fear & anxiety, vulnerability & grief on this episode of Taking Off The Mask.

“I lost my brother last year… The thing that has driven me for so long - I was raised without anything - I would be damned if I wasn’t going to be successful… My brother never really had that same thing. He was successful, but he was gentle, and he was just sweet, and he was always late for everything, and all kinds of things. We had totally different character sets… And now I’m questioning all those things that I had been working on.” - Jonathan DeYoe

Ever Forward Club’s Ashanti Branch is joined by Jonathan DeYoe. Jonathan is an author, investor, educator, and financial advisor. One of the first things that Jonathan displays to the world is his work ethic. But, importantly, Jonathan also wears his love for his brother on his sleeve. It was really difficult for Jonathan when he lost his brother a little more than a year ago. And it pushed Jonathan to make a simple, yet noble, choice - to openly release his feelings. We’re excited for you to get to know this great father, uncle, and brother.

(5:45) Jonathan and Ashanti look back on their first meeting, and Jonathan introduces himself, his work, and his relationship with his brother.

(14:00) Ashanti shares the front of his mask - funny, serious, caring - and both men discuss how they struggle to tap into the fun side of their personalities.

(19:30) Jonathan shares the back of his mask - anxiety, fragility, afraid.

(24:15) Ashanti shares the back of his mask - fear of failure, sadness, I worry a lot - and he expresses his love for his own brother.

(30:20) Jonathan and Ashanti take time to process their grief and loss. Then, they celebrate the power of men’s teams, like the Mankind Project, Evryman, and Sacred Sons.

ABOUT ASHANTI BRANCH & TAKING OFF THE MASK

Ashanti Branch, born and raised by a single mother on welfare in Oakland, California, took the road less traveled to get out of the ghetto and attended one of California’s premier engineering colleges, California Polytechnic - San Luis Obispo. Ashanti studied Civil Engineering and worked as a construction project manager in his first career. After tutoring struggling students and realizing his true passion was teaching, Mr. Branch changed careers. He had suddenly found the “fire” that was missing in his life and he hoped to ignite a similar enthusiasm in his young students.

With over 19 years mentoring youth and 10 of those years as a math teacher educating inner city youth, Ashanti was awarded with a Fulbright Exchange Fellowship to India, a Rotary Club Cultural Ambassadorial Fellowship to Mexico and a 2010 Teacher of the Year Award from the Alameda-Contra Costa County Math Educators.

Taking Off The Mask is an experience of getting real. Providing young men and men a space to have real conversations about life, challenges, joys, heartbreak, dreams, failures, and whatever is ready to be revealed.