The last couple weeks we’ve been highlighting the only three percentages that matter. These are the three measurable and controllable percentages that are absolutely critical to your long-term financial plan, especially your retirement-income success:

I talk to people every month that believe they can retire at 62 with $1 million and withdraw $80-90,000 a year for the rest of their lives. I have to tell them that their expectations are unrealistic. An 8-9% withdrawal rate will cause a retiree to run through ALL of their invested capital even BEFORE they build in a rising cost of living.

And, unfortunately, inflation adds a layer of complexity. When we increase withdrawals by the rate of inflation (a necessity), then even if your rate of return is a little higher than your rate of withdrawal, you may still run out of money. This is represented in the numbers below. For example, if you get a 5% average return and you take a 4% withdrawal at the start (increasing it to keep up with inflation), you will run out of money in the 33rd year. 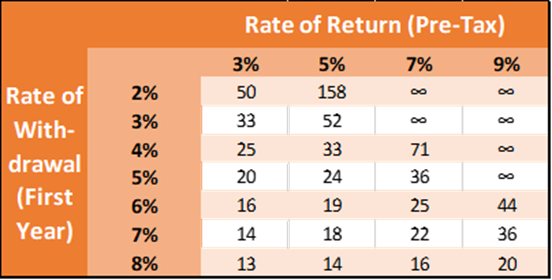 Withdrawals are taken at the beginning of each year. After the first year, annual withdrawals increase by 3% each year to compensate for future inflation. Results do not include any fees or expenses that would be incurred with an actual investment. Hypothetical investment results do not represent any specific product and are for illustrative purposes only.

I hear it all the time: “Jonathan, that’s totally fine, I’m not going to live 33 years in retirement.”

Except… what if you do?

In a 2018 survey by the Employee Benefit Research Institute (EBRI), 48% of workers expected to work past the age of 65, but only 19% actually did so. In the same survey only 10% of workers planned on retiring before 60, but 26% actually do so.

In each of these cases, 33 years of retirement income seems to be enough… except for one major issue.

There is always a very large distribution around the average.

The average temperature in the United States is 54.5 degrees Fahrenheit. This average contains both the 130 degrees of Death Valley, CA and the -70 degrees of Roger’s Pass, MT. The average height of an American man is 5’9”. This average includes both Robert Wadlow at 8’11” and Eddie Gaedel at 3’7”.

Some people who reach their 62nd birthday die before their 63rd. Sarah Knauss died in Pennsylvania in 1999 at the age of 119. According to the US Population Reference Bureau (PRB), the fastest growing age demographic in the US is the 85+ age bracket. It has doubled in size since 1990 and is expected to increase 5X in the next 30 years – to include well over 20 million people by 2050.

We are retiring earlier and living longer than we expected. It is not a stretch to think that a large number of us (10s of millions) will rely on our assets to create rising streams of income for 30, 40, or more years.

The secret to portfolio longevity is the relationship between return and withdrawal rate. Your average rate of return needs to be enough higher than the rate of withdrawal to keep your portfolio from being overwhelmed by inflation.

“Withdrawal rate” for anyone that has not heard the term before is the percentage of your portfolio you pull out during the year to maintain your lifestyle. If you have $1 million and you withdraw $40,000, you are implementing a 4% withdrawal rate.

Given that your potential average long-term rate of return is probably capped in the 6-8% range (depending on our #2 variable – your equity allocation), the only variable that you have true control over when you start to withdraw from your portfolios will be your rate of withdrawal.

If you want your retirement income to rise with your rising cost of living and last the rest of your life, you will have to maintain a withdrawal rate of less than 4.5%.

The original research on this number, done by Bill Bengen, was published in the Journal of Financial Planning in 1994 and suggests 4% as the “safemax” withdrawal rate. His work has been confirmed by a number of academic studies. He updated his numbers and today believes the safemax is probably more like 5% - the rate he uses for his own withdrawals in retirement.

If you push withdrawals beyond 4.5%, then you increase the chance that today you will be spending the assets you need tomorrow to create your future inflation-adjusted income. Once you start to withdraw more than 4.5%, you have begun a downward spiral that it will be impossible to recover from without either incredible luck (a few very high market return years) or a serious reduction in lifestyle.

NOTE: this withdrawal amount is inclusive of the taxes that are due on the withdrawal. You can’t pull 4.5% out to spend and then another 1% to pay taxes. If you do, that is a 5.5% withdrawal rate and you will run out of money down the line.

If, however, you commit to maintaining total portfolios withdrawals of less than 4% AND you keep your equity allocation up, your portfolio will very likely continue to grow and increasingly outpace inflation. In this scenario, your portfolio will be at its highest point as you near the end of your life and you will have an opportunity to leave a significant legacy to your family and/or your community.

If you’ve ever read about one of those people who unexpectedly leave large sums to beloved community organizations and perhaps imagined one day doing the same for your favorite organization… the combination of steady investing (equity allocation) and reasonable frugality (safe withdrawal rate) is the path you seek.